Skip to main content
It looks like you're using Internet Explorer 11 or older. This website works best with modern browsers such as the latest versions of Chrome, Firefox, Safari, and Edge. If you continue with this browser, you may see unexpected results.

An extraordinary debut novel, Freshwater explores the surreal experience of having a fractured self. It centers around a young Nigerian woman, Ada, who develops separate selves within her as a result of being born "with one foot on the other side." Unsettling, heartwrenching, dark, and powerful, Freshwater is a sharp evocation of a rare way of experiencing the world, one that illuminates how we all construct our identities. Ada begins her life in the south of Nigeria as a troubled baby and a source of deep concern to her family. Her parents, Saul and Saachi, successfully prayed her into existence, but as she grows into a volatile and splintered child, it becomes clear that something went terribly awry. When Ada comes of age and moves to America for college, the group of selves within her grows in power and agency. A traumatic assault leads to a crystallization of her alternate selves: Asụghara and Saint Vincent. As Ada fades into the background of her own mind and these selves, now protective, now hedonistic, move into control, Ada's life spirals in a dark and dangerous direction. Narrated from the perspective of the various selves within Ada, and based in the author's realities, Freshwater explores the metaphysics of identity and mental health, plunging the reader into the mystery of being and self. Freshwater dazzles with ferocious energy and serpentine grace, heralding the arrival of a fierce new literary voice.

Smith's unflinching poetry addresses race, class, sexuality, faith, social justice, mortality, and the challenges of living HIV positive at the intersection of black and queer identity. The collection opens with a heartrending sequence that imagines an afterlife for black men shot by police, a place where suspicion, violence, and grief are forgotten and replaced with the safety, love, and longevity they deserved on earth. "Dear White America," which Smith performed at the 2014 Rustbelt Midwest Region Poetry Slam, has as strong an impact on the page as it did on the spoken word stage. Smith's courage and hope amidst the struggle for unity in America will humble and uplift you.

When the chant comes

Kay Ulanday Barrett has been bringing his unique poetry to audiences for over a decade, unpicking vital political questions around race, sickness and disability and gender, and chronicling the everydayness of life in the U.S. Empire with humor, poignancy and inimitable vitality. Each of these poems is a brilliant little story. Taken together, they show a master craftsman at the top of his game.

All the birds in the sky

"From the editor-in-chief of io9.com, a stunning novel about the end of the world--and the beginning of our future Childhood friends Patricia Delfine and Laurence Armstead didn't expect to see each other again, after parting ways under mysterious circumstances during middle school. After all, the development of magical powers and the invention of a two-second time machine could hardly fail to alarm one's peers and families. But now they're both adults, living in the hipster mecca San Francisco, and the planet is falling apart around them. Laurence is an engineering genius who's working with a group that aims to avert catastrophic breakdown through technological intervention. Patricia is a graduate of Eltisley Maze, the hidden academy for the world's magically gifted, and works with a small band of other magicians to secretly repair the world's every-growing ailments. Little do they realize that something bigger than either of them, something begun years ago in their youth, is determined to bring them together to either save the world, or plunge it into a new dark ages. A deeply magical, darkly funny examination of life, love, and the apocalypse"

Drawing on an international range of examples, from Che Guevarra to "The Crying Game," Profit and Pleasure leads the discussion of sexuality to a consideration of material reality and the substance of men and women's everyday lives.

Rooted in the Indigenous Americas and the Pacific, and drawing on disciplines ranging from literature to anthropology, contributors to Queer Indigenous Studies call Indigenous GLBTQ2 movements and allies to center an analysis that critiques the relationship between colonialism and heteropatriarchy. By answering critical turns in Indigenous scholarship that center Indigenous epistemologies and methodologies, contributors join in reshaping Native studies, queer studies, transgender studies, and Indigenous feminisms.

Based on the reality that queer Indigenous people experience multilayered oppression that profoundly impacts our safety, health, and survival, This book is at once an imagining and an invitation to the reader to join in the discussion of decolonizing queer Indigenous research and theory and, by doing so, to partake in allied resistance working toward positive change.

Aberrations in black : toward a queer of color critique

Aberrations in Black tells the story of canonical sociology’s regulation of sexual difference as part of its general regulation of African American culture. Ferguson places this story within other stories—the narrative of capital’s emergence and development, the histories of Marxism and revolutionary nationalism, and the novels that depict the gendered and sexual idiosyncrasies of African American culture—works by Richard Wright, Ralph Ellison, James Baldwin, Audre Lorde, and Toni Morrison. In turn, this book tries to present another story—one in which people who presumably manifest the dysfunctions of capitalism are reconsidered as indictments of the norms of state, capital, and social science. Ferguson includes the first-ever discussion of a new archival discovery—a never-published chapter of Invisible Man that deals with a gay character in a way that complicates and illuminates Ellison’s project.

The city in the middle of the night

"If you control our sleep, then you can own our dreams. And from there, it's easy to control our entire lives." The bestselling author of All the Birds in the Sky returns with a strange, haunting, and deeply human tale. Sophie serves coffee at an underground cafe. She stays in the shadows and listens to the troubles of the parlor guests, but does not draw attention to herself for one simple reason: Sophie is supposed to be dead. When a nationalistic revolution forces Sophie from her safe haven, she must make a dangerous journey to a new city, one that revels in hedonism and chaos. After joining up with a band of smugglers, she finds herself on a long and treacherous path that will lead her far closer to the truth of her entire world--and to the dangers that lurk even in the light of day"

"Nevada is the darkly comedic story of Maria Griffiths a young trans woman living in New York City and trying to stay true to her punk values while working retail. When she finds out her girlfriend has lied to her, the world she thought she'd carefully built for herself begins to unravel, and Maria sets out on a journey that will most certainly change her forever."

In the near future, Oakland is haunted by natural disaster and political collapse. When k realizes that she has infected her girlfriend, bea, with a disease, she loses herself in a masochistic quest for atonement, leaving bea to contend with her fears about an increasingly precarious world by herself. Literary and adventurous, lyrical yet anchored, Davey Davis' work explores the meanings of responsibility, romantic love, and queer resistance in a late-capitalist hellscape where futurity is always in question.

"From Mallory Ortberg comes a collection of darkly mischievous stories based on classic fairy tales. Adapted from her beloved "Children's Stories Made Horrific" series, "The Merry Spinster" takes up the trademark wit that endeared Ortberg to readers of both The Toast and her best-selling debut Texts From Jane Eyre. The feature become among the most popular on the site, with each entry bringing in tens of thousands of views, as the stories proved a perfect vehicle for Ortberg's eye for deconstruction and destabilization. Sinister and inviting, familiar and alien all at the same time, The Merry Spinster updates traditional children's stories and fairy tales with elements of psychological horror, emotional clarity, and a keen sense of feminist mischief. Readers of The Toast will instantly recognize Ortberg's boisterous good humor and uber-nerd swagger: those new to Ortberg's oeuvre will delight in her unique spin on fiction, where something a bit mischievous and unsettling is always at work just beneath the surface" 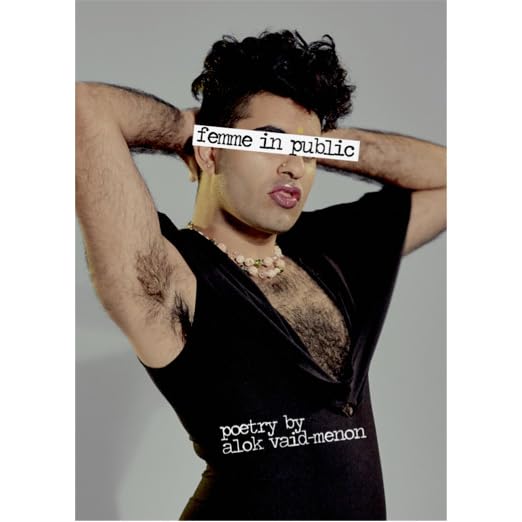 "Femme In Public (2017) is a collection of poetry by nonbinary artist Alok Vaid-Menon. In the author's words it 'is a dream of what it could look like to celebrate transfemininity in public - both in ourselves and for the people who desire us (by which I mean: everyone, across time, always).'"

Advice from the lights : poems

"Stephen is sometimes Stephanie and sometimes wonders how his past and her past are their own collective memory. Advice from the Lights is a brilliant and candid exploration of gender and identity and a series of looks at a formative past. It's part nostalgia, part confusion, and part an ongoing wondering: How do any of us achieve adulthood? And why would we want to, if we had the choice? This collection is woven from and interrupted by extraordinary sequences, including Stephanie poems about Stephen's female self; poems on particular years of the poet's early life, each with its own memories, desires, insecurities, and pop songs; and versions of poems by the Greek poet Callimachus, whose present-day incarnation worries (who doesn't?) about mortality, the favor of the gods, and the career of Taylor Swift. The collection also includes poems on politics, location, and parenthood. Taken all together, this is Stephen Burt's most personal and most accomplished collection, an essential work that asks who we are, how we become ourselves, and why we make art"